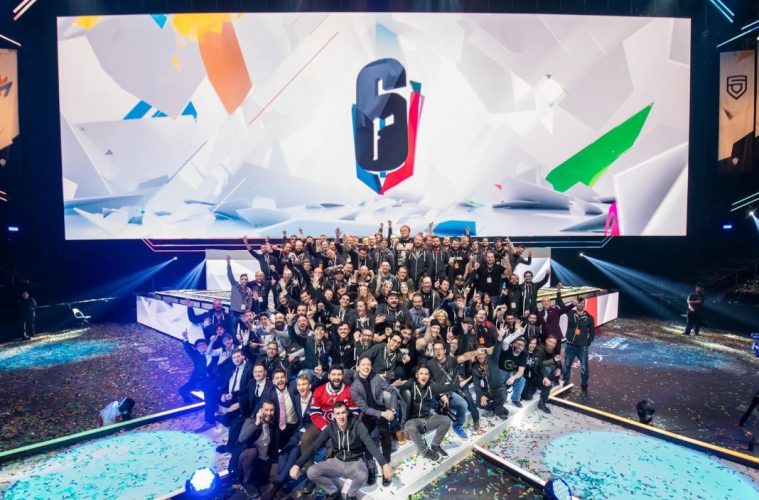 The talent who work behind the scenes forgo the spotlight and work in the shadows to make events like Six Invitational 2019 possible. Travelling for the first time to Canada, James “Jebus” Foster, was the other lucky Australian to be given a shot on the world stage. James works full time for ESL as the APAC Community Manager and he was stoked to work the Six Invitational in a league operations capacity. To conclude this series, I couldn’t think of a more inciteful person to speak with to gauge a unique perspective on competitive Rainbow Six Siege.

Tell us about when/how you found out you would be working the Six Invitational?

I actually woke up in the middle of the night to a Discord message from a member of the ESL team in Poland who said he had an offer in my email he would like me to accept. In the email, I found that I was being invited to work the Six Invitational in a league operations capacity. I could barely contain my excitement and couldn’t get back to sleep. Which was a blessing in disguise as I had an early morning flight and I set my alarm for the day after by accident. All I wanted to do was reply to the offer with “YES, YES, A THOUSAND TIMES YES” but I had to do my due diligence and make sure it didn’t overlap with any existing events.

Chance had it that I wasn’t required for the one event in Australia that would have made me unavailable to work the Six Invitational. The stars aligned in my favour and I’m incredibly grateful for the opportunity that I was given and to ESL Australia, specifically Nick Vanzetti, who encouraged me to accept the offer.

This was my second time travelling internationally and my first time travelling to Canada. I had previously travelled to Japan to work the Season 8 APAC LAN Finals that was hosted in Akihabara in Tokyo back in October last year. I am quite used to flying nationally as I work remotely for ESL Australia and every month or two I do get flown somewhere to work an event. You could say that I have flying down to a science. I make sure I have snacks, comfort items such as a neck brace and eye mask, songs, tv shows and movies downloaded to watch and listen to pass the time. But like anyone who travels internationally, in the end, the long flights are never truly comfortable. It’s a small price to pay in the end.

What was your initial thought when you first arrived in Montreal?

I had gone a bit overkill buying winter/snow gear in Australia in the lead up to travelling to Montreal. I had expected colder temperatures and white snow that you would see out of a Disney movie. After getting through the airport, I walked outside to find that the snow I was looking forward to was . I wouldn’t classify the roads in Montreal as roads. Speed limits were more of a suggestion than a rule, lines on the roads were all over the place and at some sections, there were no lines at all. It was a bit of a shock to see other country’s roads. A few days after I arrived, there was a blizzard and I finally got to experience the feeling of being a Disney Princess in the soft white snow. Being from Australia, the freezing temperatures is something I never want to experience again!

How did you feel when you saw the arena (main stage) for the first time?

I had the opportunity to head to the arena while Group Stage (that was at another venue) was still happening. When I walked into Place Bell (the main arena), the stage was still being built but the screen had already been assembled and raised. I had worked a few major events in the past, and the screen size of the Six Invitational was enormous in comparison. I was in absolute awe and I had the pleasure of watching the test runs of the game and the API which was very impressive.

What was the most memorable experience you had during the event?

There are so many to choose from. It ranges from meeting the talent to being able to catch some of the Grand Final from the best seat in the house. But my most memorable experience was something that happened completely out of the blue after the entire event had finished and I was sitting in a cozy corner having a drink at the after-party. The manager from Ninjas in Pyjamas, Absurdo, came up to me and shook my hand and thanked me for helping them out at Group Stage. While I can’t go into it, there was a moment that required a bit of hands-on from the staff and I spoke to Absurdo and made sure everything was how it should be. Although I didn’t see him during the entire main event, the fact he sought me out meant quite a lot. It’s the small gestures in life that I truly appreciate and hold on to.

6) Who did you meet that made the most remarkable impression on you?

I’m going to be a bit cheeky and choose two people as there are so many to choose from. The first is Jan (BK-201) who I shared a room with for the entire event. We immediately hit it off and we were basically two peas in a pod. It’s a really nice feeling when you can be genuine friends with the people you work with. It makes working in an industry that you already love just that much better.

The second was Verdi who I had only spoken to once before online and that was over a year and a half ago when he did a community cast for the R6 ANZ community. I went up to him and introduced myself and he told me he remembered me and our conversation from 2017 which as I said above, the small gestures are the best ones in life. Unfortunately, we weren’t able to grab a drink together as we planned but it was still amazing to meet him.

What was the atmosphere like during the final days of the event?

It was surprisingly laid back. The staff were working like a well-oiled machine. The players were in the flow of what they needed to and when. Though when the teams were on the main stage, you could just feel the pressure and the competitive tension. There were some moments where all that went away such as Kizoku doing some crazy stuff on camera and cheering on the crowd and another NORA player taking their shirt off by doing a little dance. I tried to keep my poker face but I couldn’t help but have a laugh during NORA’s antics.

The sportsmanship shown by all the teams was incredible. There was one match where both teams agreed to walk out on to the stage after the match was completed regardless of who won. I cannot think of another game where sportsmanship on this level exists.

Did the Six Invitational meet or exceed your expectations?

It definitely exceeded my expectations. As I stated earlier, I have worked a few major events. Every event had its own unique way of being special. The Six Invitational was no exception. From the absolute awe of the screen size to the teams who were an absolute pleasure to meet and work alongside, I was pleasantly surprised. Being an outsider to NA, LATAM and EU, I didn’t expect such a warm welcome from the teams, talent and the staff team I worked with.

I got to know the teams, some of them I was able to have a laugh with within seconds of introducing myself, Interro gave me a cool shoutout on stream, I got to work with the ESL Poland team (Kumiko, Embirrim, BK, etc). I could not have asked or expected any more as the entire event as a whole had already exceeded my expectations.

What are you going to miss most about the Six Invitational?

The people; staff, teams, talent and the crowd. These people are the reason these events can happen. I like to call the days after an event “the post-LAN blues”. You work an event for 1-2 weeks straight and every moment is a moment to remember. Once an event is over and you go back out into the real world, a wave of melancholy sweeps over you.

Is there anything else you would like to say about your experience or any shoutouts?

I would like to give a shout to Filip (Kumiko) and the Poland team who invited me over to Montreal in the first place. A shout out to Interro for his shoutout of me because we all love shout outs. I would like to say to anyone that wanted to attend the event but ultimately didn’t, please do yourself a favour and go to the next one. It isn’t just sitting down watching a game being played. It’s an experience that you will never forget and you can say you are a part of Rainbow 6 history. Stop reading about other people’s experiences and go out and experience it for yourself!

And lastly, a thank you to Ubisoft for making all of this possible. You have given a lot of people an opportunity to be a part of something bigger. Siege has changed my life for the better.

Well, that concludes this short series about the Aussies who worked Six Invitational 2019, I would like to thank both Devmarta and Jebus for taking the time to give a special insight. I think I speak on behalf of the ANZ R6 community to say that we would love to see both of these talented gentlemen back to it again for Six Invitational 2020.

Thank you for reading, I hope to be releasing some fresh R6 content soon!