Welcome to Respawn Ninja’s Rift Rivals coverage! I’ll be recapping the games from each day, so if you can’t watch the epic grudge matches going down live, here’s a place for you to catch up! We’ve got plenty of fantastic games going down, so enjoy the first instalment of Rift Rivals Recap! 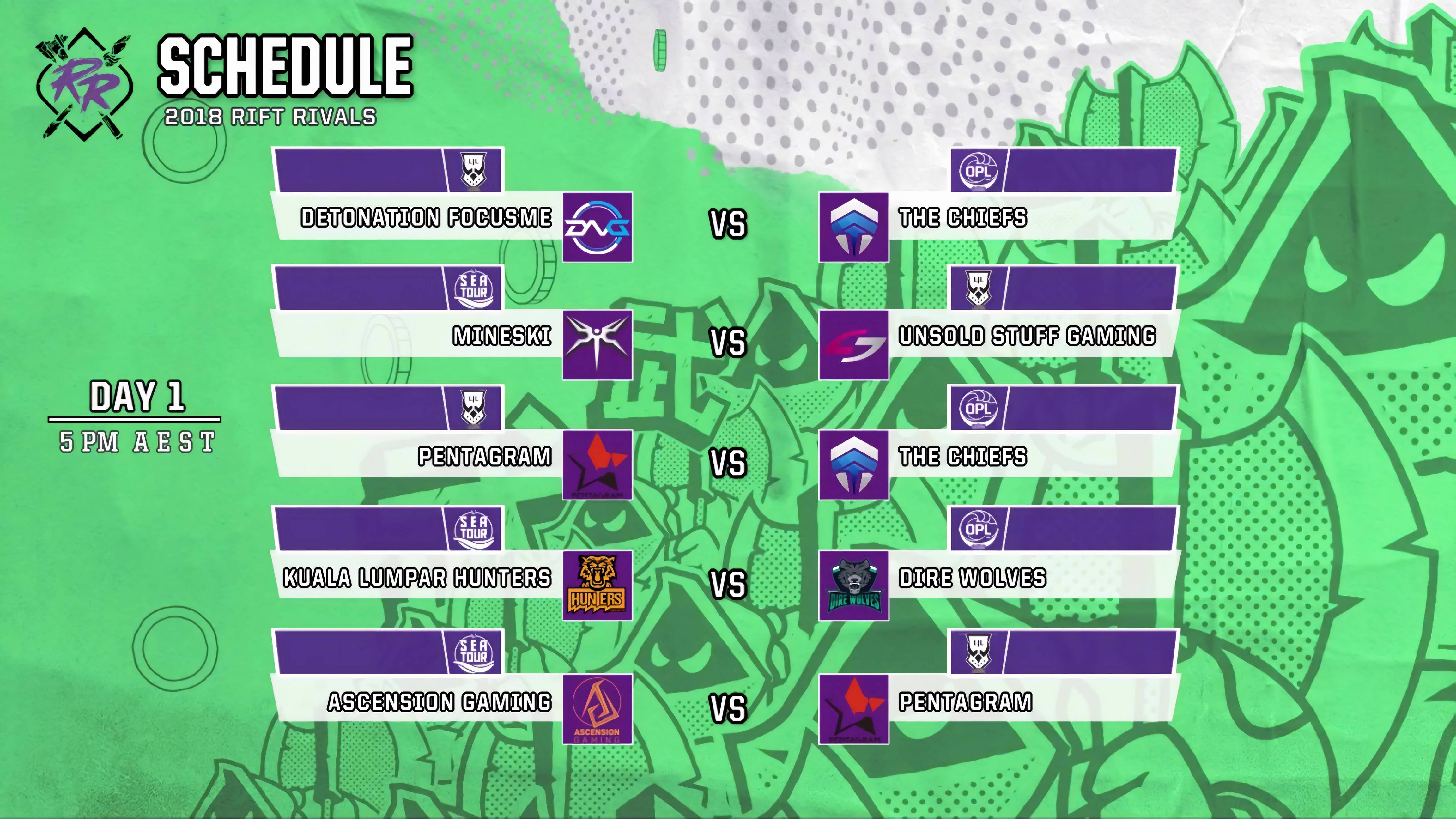 The Chiefs have a history with DFM stretching back 3 years, and that was on the line again as they went up against them in the first game of Rift Rivals 2018. It was the same story in the early game as Swip3rR was camped and gave over First Blood to Evi’s Dr. Mundo. DFM went in on Swip3rR again and killed him, before ry0ma picked up two return kills onto Steal and Evi. With Destiny rotating top, Raes was all alone and vivID flashed in to take Raes’ Flash, opening the door for Yutapon’s Vladimir to Flash onto him to pick up the kill. During this time, DFM moved onto the botlane outer turret, easily taking it for First Turret and pushing towards the inner. However, the Chiefs moved for the Rift Herald and caught the overextension of DFM for two kills.

A 4-man engage from Morgana onto the Chiefs set up Yutapon for a massive Hemoplague, however after Ceros burst down two members of the Chiefs, the rest of the team bounced back to trade 4-for-4, with Swip3rR winning a 1v2 to walk away. The classic ARAM came out as both teams danced around the midlane, trying to find a way to take the Infernal Drake. The Chiefs moved in and secured it to complement their Ocean Drake, but got aced in the ensuing teamfight to give DFM a 3k gold lead at 20 minutes. The brawls continued, but the next one went the way of the Chiefs as they traded Raes for four kills onto DFM, as they moved onto Baron to kill off Steal as attempted to live up to his name.

$25 tickets for the LIVE finals on Thursday here with the code "RIVALS" ? https://t.co/gNoRyBe6vs pic.twitter.com/RojLDDwjkR

With the Baron, the Chiefs looked to fight some more and won the next fight, picking up an extended ace after Yutapon and Evi stuck around and were taken down by Swip3rR and ry0ma. With the gold lead see-sawing like crazy, the Chiefs laid their eyes on the midlane inhibitor and charged for it, just snaking out a win to take their third Drake of the game. Another fight went down, DFM winning this one, but with super creeps pushing into their base they were forced to recall, but Raes teleporting into DFM’s base somehow took on both Ceros and Steal and escaped with a kill and his life. The game grew ever closer to the edge, and DFM’s last rolls of the dice turned up snake eyes as the Chiefs took the fight to win the first game of Rift Rivals 2018 for Oceania.

The second game of Rift Rivals was the battle of two third-place teams, as Southeast Asia’s Mineski went up against Japan’s Unsold Stuff Gaming. The draft was very interesting, as Mineski opted for a gold-funnel strat with Gari on Kai’Sa with their midlaner Exosen heading to the botlane on Morgana alongside a Lulu. On the other side, USG’s botlane opted for a Pyke + Lucian combo, which picked up First Blood as Tussle followed up on a brilliant engage from Enty to kill Hamezz’ Lulu. The game was relatively quiet for the first twenty minutes, with only two kills to USG alongside two turrets and Drakes as they created a 3k gold lead. However, Mineski were just biding their time and unleashed their funnelled Kai’Sa to cleanly ace USG at 21 minutes to take a free Baron on top.

A monstrous 6 turret Baron powerplay skyrocketed the gold lead into Mineski’s favour, 5k ahead at 25 minutes. The rest of the game was not long for the world, as with an Infernal Drake they began sieging the midlane. USG sensed that the game was definitely slipping away, and tried to position for a favourable fight. But it wasn’t to be as Kai’Sa unleashed once more to ace Unsold Stuff Gaming, their only kills being part of an Ace, to take Game 2 and send the LJL to 0-2 so far at Pacific Rift.

The Chiefs were off to a middling start as Raes got caught out for First Blood, but they didn’t give up as Babip picked up two kills on his Sejuani alongside Raes’ Kennen. However, Pentagram weren’t content to sit around as they picked up two more kills alongside the first turret. With a Rift Herald, Chiefs equalised but had to give up an Ocean Drake for it. By 15 minutes, the only difference between the teams as a 1k gold lead to Pentagram. Chiefs managed to take a skirmish in the jungle for two kills and the midlane turret, allowing them to start to gain control around the Baron.

A last minute turn around from @PGM_tokyo to defeat the second seed from OCE, the @ChiefsESC! #RiftRivals2018

$25 tickets for the LIVE finals on Thursday here with the code "RIVALS" ? https://t.co/gNoRyBe6vs pic.twitter.com/kSgcv6RVaZ

Chiefs had taken a few more kills, and after a teamfight bugged out and a Chronobreak was offered and subsequently denied, moved onto Baron and successfully turned to pick off Gaeng’s Morgana. However, the Chiefs’ composition meant there was very little damage, and that definitely showed as an extended teamfight went the way of Pentagram in a 2 for 3 trade. The Chiefs continued to rotate and look for picks, finding one onto Ramune and they moved for Baron. However, with their lack of damage sources, the Baron took an awfully long time for Chiefs and YutoriMoyasi’s Vladimir came in and killed four members of the Chiefs to only leave Babip alive, and with a 3k gold lead for the LJL champions.

The Chiefs weren’t giving up however, as they won an extended fight around the Elder Drake and successfully took it down and began moving to position themselves around it. The posturing paid off, as they picked off Ramune and finally took down Baron after almost a minute of battling their raid boss. As they moved into Pentagram’s base, it was shades of their game against Tectonic as they lost a crucial teamfight and Pentagram walked to the other end of the map and took down the Nexus to equalise the records of Oceania vs Japan at one apiece.

The Dire Wolves snatched themselves First Blood after a skirmish near the Dragon Pit, with Shernfire taking that for himself. Triple was next, picking up a kill onto Arrhedge’s Zoe. The game went quiet until 12 minutes when Triple got caught out, before being traded for QaspieL with Dire Wolves maintaining their 1.5k gold lead. As the Dire Wolves made a move for Infernal Drake, Cupcake quietly sat inside the bush before combo-ing in on Alistar to start a bouncy castle that netted them three kills as well as the Drake. With the sudden rush of power, the Dire Wolves started expressing dominance all over the map.

With the game reaching 20 minutes, the Dire Wolves had firm control over the game with a whopping 6k gold lead, and their brawling composition was working wonders against the Southeast Asian side, who just couldn’t find a favourable fight. As the Wolfpack danced around Baron, QaspieL overextended and was killed alongside Shiro and SOUPerior to open up Baron for the OPL champions. However, the best that the Hunters could do was kill BioPanther and chunk out the rest of the Dire Wolves and all they did was reset and moved to take their second Infernal Drake. They returned to the scene of the crime and killed off OzoraVeki and SOUPerior to take Baron and improve their gold lead to 10k. With the timer ticking past 28 minutes, the 3-time OPL champions found their fight and killed four members of the Kuala Lumpur Hunters to take the game and improve Oceania’s scoreline to 2-1 while SEA fell to 1-1.

The last game of the day was Japan’s last chance at redemption as they went up against SEA champions Ascension Gaming. With Paz being the first player to pick the newly reworked Aatrox, this game was always sure to be interesting. Paz was pressured early on, but managed to turn around a gank with World Ender to allow Once to secure First Blood onto Rockky’s Ornn. Moving down toward the midlane, Once forced G4 into the jungle and Gaeng arrived at the perfect time for an assist on Trundle’s second kill. With Once’s presence in the topside of the map, Paz was able to take First Turret for Pentagram. A brawl in the botlane resulted in a 2 for 4 trade for Pentagram and gave them a midlane turret, after they turned around Ascension’s engage.

As the game reached 20 minutes, it was slipping more and more out of Ascension’s control, and with Paz’s ultimate stymying multiple attempts to kill him it wasn’t getting easier to stop the splitpush. However, as Rich got picked off, Pentagram overextended and Ascension pounced to pick up 3 kills. Trading turrets back and forward, somehow Ascension found another fight and killed off 3 more members of Pentagram to secure Baron. Almost completely erasing their gold deficit, the game had become a whole lot closer. After a brief reset, both teams postured around the midlane, but when a fight broke out it was Ascension that came away with it and the midlane inhibitor as well as a 2k gold lead was their prize.

However, the game stagnated and the gold lead evened out as the game ticked over 35 minutes. Paz got caught out on a Teleport play but YutoriMoyasi exploded once again to carry the 4v5 teamfight and give the Baron to Pentagram. The gold deficit that Ascension had clawed back was suddenly in their faces again as Pentagram walked down the midlane with Elder, Baron, and a 7k gold lead. The Japanese champions rotated around Ascension’s base, taking structures with abandon. A massive fight in the botlane went the way of Ascension in a 3 for 4, and no team could end. After skirmish after skirmish, Ascension took the fight they needed and aced Pentagram. Breaking down the toplane, they picked off a respawning Once and Paz to take the game and send SEA to a first place tie with Oceania at the end of Day 1. 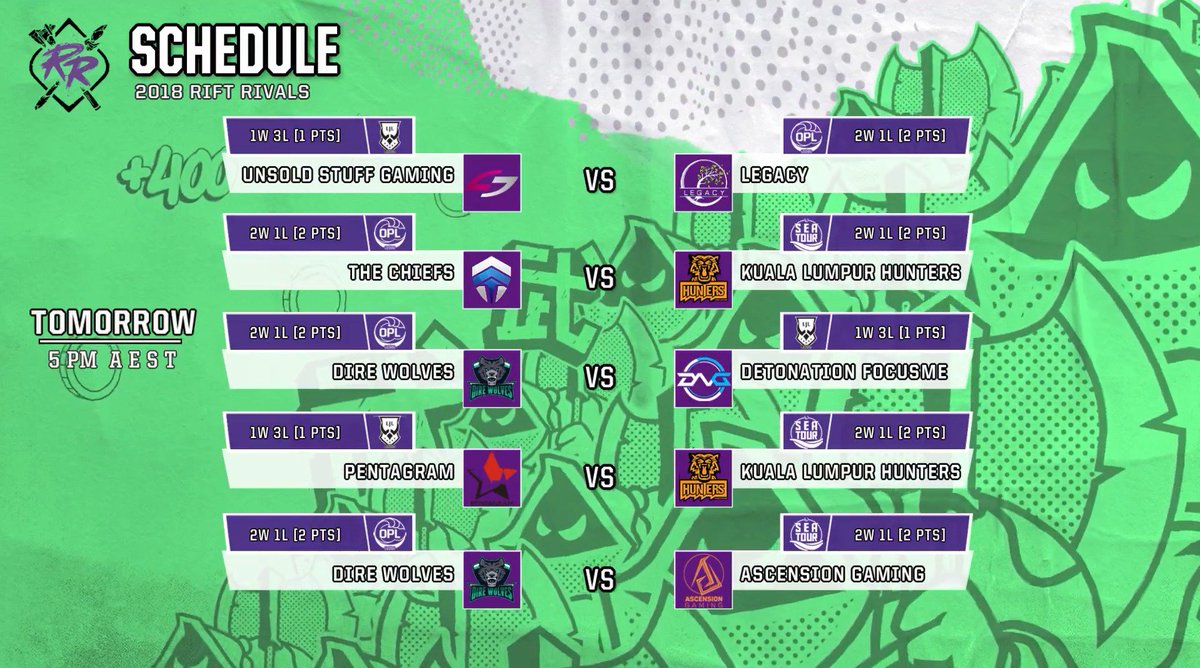 And that wraps up our first day of Rift Rivals 2018! Stay tuned, because we’ll have more content coming out all week right here on Respawn Ninja! As always, if you want to catch a bit of the action, head on over to http://twitch.tv/OPL and join the thousands already cheering on OCE! 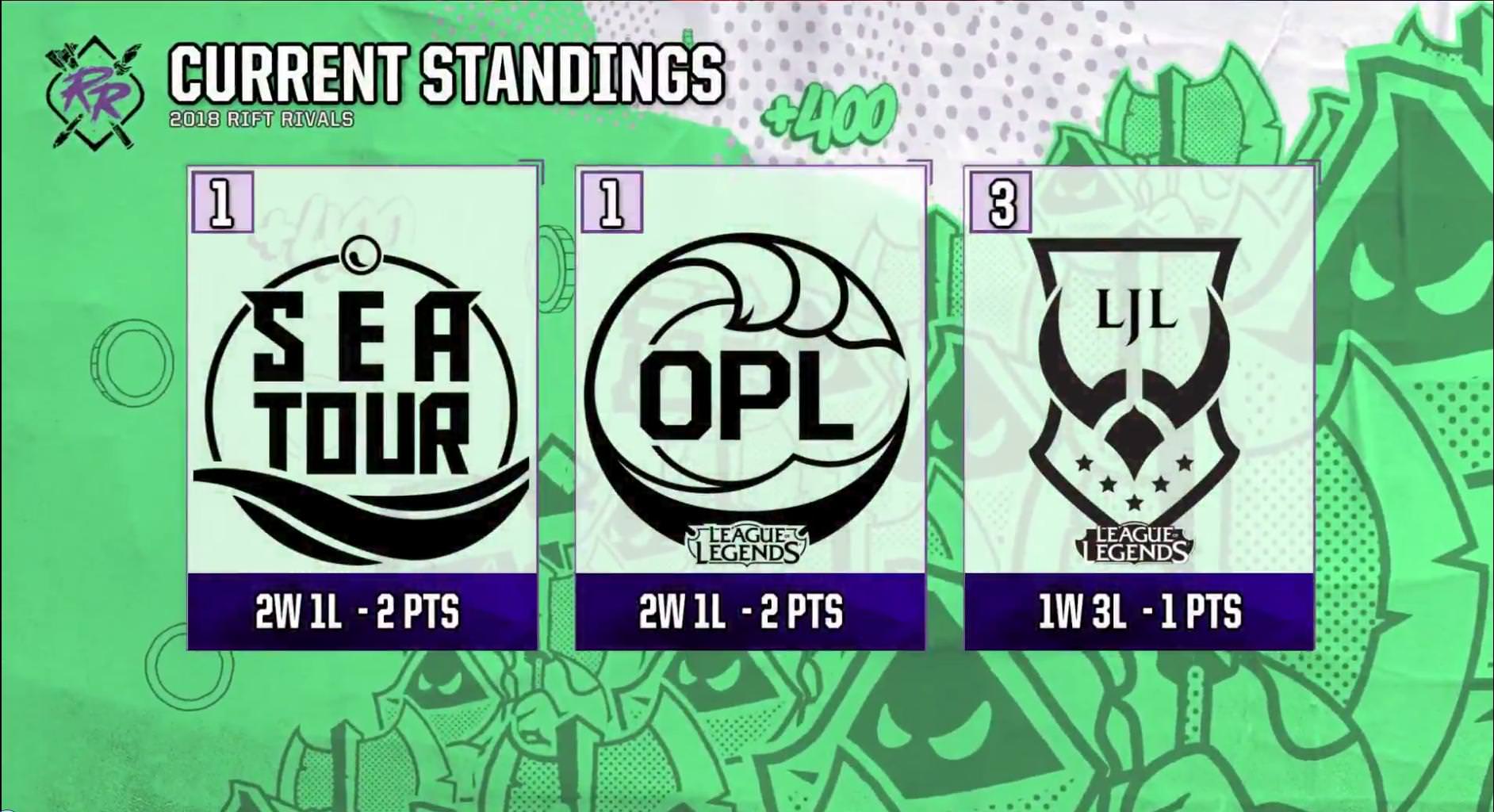