Welcome to Respawn Ninja’s Rift Rivals coverage! I’ll be recapping the games from each day, so if you can’t watch the epic grudge matches going down live, here’s a place for you to catch up! We’ve got plenty of fantastic games going down, so enjoy the second instalment of Rift Rivals Recap! 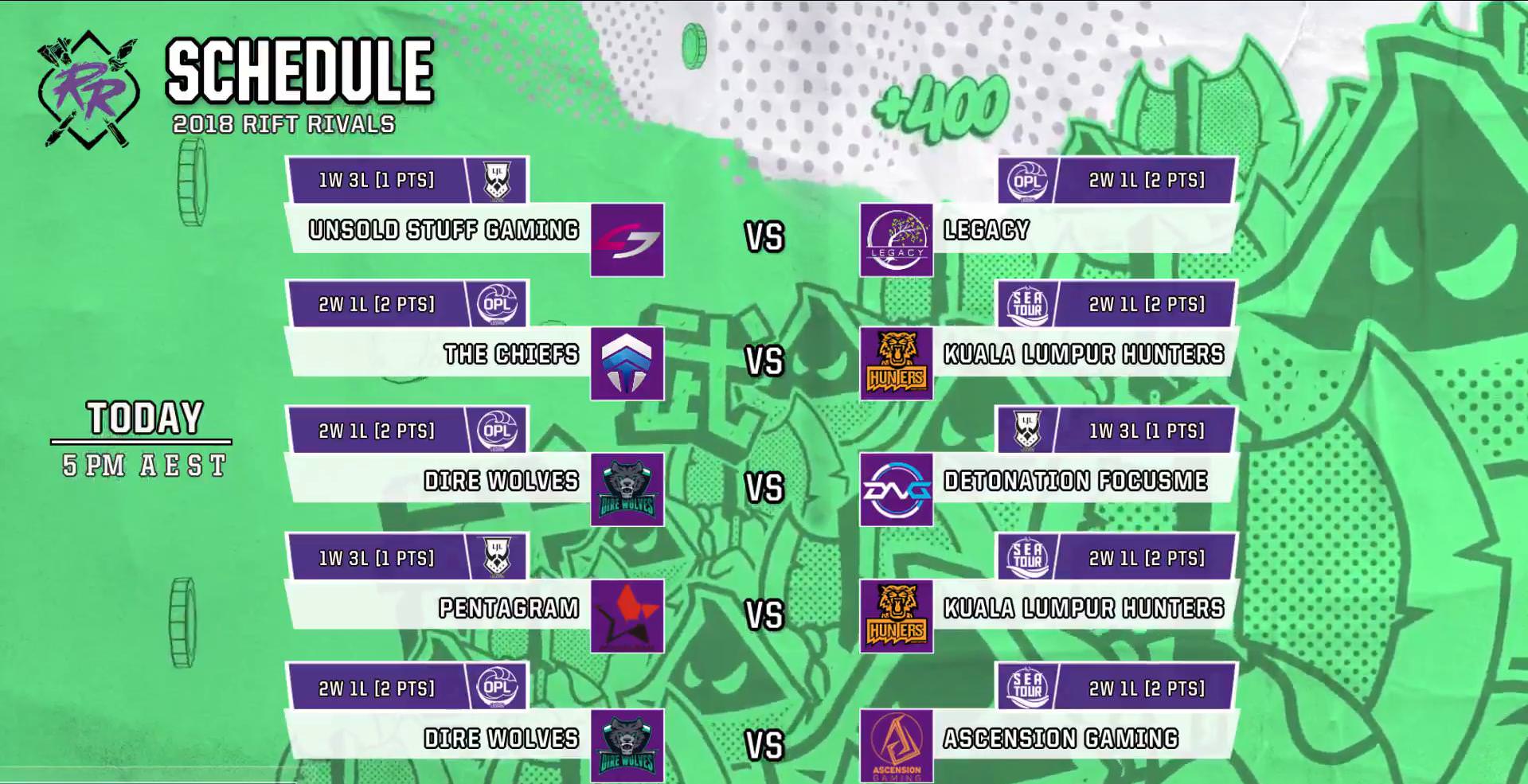 Our first look at Legacy Esports was a positive one as they caught out Tussle’s Graves to give a kill to Claire’s Zoe even before jungle camps had spawned. Another fantastic 1v1 from Claire took down Gariaru’s Swain and pushed the early lead to 1k by 7 minutes. Legacy also caught themselves a free Infernal Drake to continue their early game dominance. However, an attempt on the Rift Herald allowed USG to collapse quickly and pick up two kills onto Mimic and Only to equalise the early gold differential. The first turrets went the way of Legacy, as Mimic secured the bonus gold on his Poppy before the Rift Herald took care of the midlane outer. They secured the two bottom lane turrets at 21 minutes just after Mimic solokilled apaMEN, and this early game was all Legacy.

A skirmish in the toplane gave two kills to USG, only losing Gariaru in the process, but Legacy continued their objective control with now an extra Ocean and Mountain Drake to their name. Claire’s stellar Zoe play freed up the rest of Legacy to secure Baron, and after taking down the worm they peeled off and killed off apaMEN and Gango as they broke the base in multiple places. Unsold Stuff Gaming were desperate to win a fight and flanked a retreating Legacy, but were absolutely annihilated in the ensuing fight and Oceania’s third seed charged back into the base to take the first game of the day and first place for the home region.

Our third look at the Chiefs went the same as the first two, as Swip3rR gave up First Blood but took it back a minute later for a revenge kill onto QaspieL. Ry0ma caught a kill onto ArrHedge’s Swain, and First Turret was taken by Swip3rR to start creating a gold advantage for the Oceanic team. By 15 minutes, both teams had also traded Infernal Drakes and the game was slowly creeping in the favour of the Chiefs. Moving down to the botlane, the Chiefs exploded onto an unprepared Kuala Lumpur Hunters and picked up 4 kills and two turrets without losing any members. With a further pick onto ArrHedge just before 20 minutes, the Chiefs took Baron as it spawned, killing off SOUPerior just before they reset the map.

Kuala Lumpur Hunters thought they had a pick onto Swip3rR, but that roll of the dice again showed up snake eyes as ry0ma’s Cassiopeia locked down the 4 members of KLH ganging up onto the Kled and a massive initiation from Destiny sealed the SEA team’s fate. Picking up three kills, they swarmed into the base and with only a single death to their name, the First Blood onto Swip3rR, the Chiefs continued Oceania’s dominant run as they picked up the second game of the day. With the win, they made it so much harder for the other teams to catch up as SEA were now 2-2 and Japan were 1-4 heading into Game 3.

Oceania’s third outing of the day started off Steal’s Nocturne ganking early to pick up First Blood onto Cupcake’s Braum. Triple was next as Steal came back in to help Ceros with a kill, but Steal stayed far too long and gave Shernfire’s Hecarim a nice early kill. Steal would die again just before 10 minutes but after helping the rest of his team pick up multiple kills onto Shernfire and Triple. Another brawl went the way of Detonation FocusMe and they continued to play very smart, picking up kills when they know they would win the fight and began pressing their advantage. However massive their lead seemed as the game closed in on 20 minutes, the Dire Wolves were only 1k gold behind, especially after being dived by DFM and successfully turning around a fight near the midlane inner.

The game reached 27 minutes with only kills and turrets being traded, but Detonation FocusMe made a move for Baron and were punished tremendously as Shernfire died in exchange for four members of the Japanese side and Baron to the Dire Wolves. The lead that had been in place for DFM completely vanished and the Wolfpack quickly amassed a 5k gold lead. After Detonation FocusMe decided to try and kill BioPanther’s Dr. Mundo, he simply ulted and Stopwatched as his team descended on the hapless Japanese side and took another teamfight. With the stunning turnaround, it only took another 20 seconds for the Dire Wolves to take down the Nexus and almost guarantee their spot in the Rift Rivals final.

The fate of Japan’s run at Rift Rivals was all in Pentagram’s hands, but that didn’t start on the right foot as SOUPerior and OzoraVeki killed YutoriMoyasi’s Vladimir and blew both his and the Flash of Once’s Taliyah after a failed return gank. Paz was taken down by QaspieL for KL Hunters’ second kill, but the Xin Zhao was killed seconds later in response. Both teams skirmished frequently, and near the Baron pit at 10 minutes yielded kills for both sides, but the advantage was Kuala Lumpur’s as they demolished the first turret of the game. It looked like the finals position was slipping away from Pentagram but they unleashed again to pick up 4 kills and the Rift Herald and reclaimed control of the game.

By the time the game had made it to 20 minutes, KL Hunters had two Drakes, but Pentagram had two turrets and the kill and gold lead, as well as the momentum. Although they were 7k down, the KL Hunters found the fight they wanted and aced Pentagram in exchange for QaspieL and ArrHedge, and the Baron was all theirs. Their gold deficit didn’t disappear even with the Baron, but with OzoraVeki pumping out damage they won the next fight at 34 minutes and did not hesitate to teleport into Pentagram’s base and end the game. With their win, Oceania were locked into the finals on Thursday night.

With their region’s spot already locked in, the Dire Wolves didn’t have much to do against Ascension Gaming, and the OPL champions gave up First Blood to Lloyd’s Morgana. However, Triple continued his dominant Zoe play as he picked up a solokill onto G4’s Talon before he repeated the feat alongside Shernfire minutes later. With only 10 minutes gone, the Dire Wolves had scrapped their way to a 5 kill to 1 lead after k1ng snagged a Double Kill onto his lane counterpart as well as a 2k gold lead.

With Rift Herald on their side, the Dire Wolves won a massive fight and left only Rich alive on Ascension Gaming as their gold lead climbed to 4k with the contribution of first turret gold. They weren’t done there, this time successfully acing Ascension near the Infernal Drake with a phenomenal Quadra Kill to k1ng’s Swain. With every minute the gold lead grew higher and higher in the favour of the Dire Wolves and Ascension Gaming began to lose control. The next fight at 18 minutes resulted in the first inhibitor in the midlane dropping and the Wolfpack were now 10k in front with almost no chance of return from ASC. The base for the SEA side was in tatters after repeated invades from the Dire Wolves. Finally it was too much for Ascension to handle and just shy of the fastest game, in 23 minutes the Wolfpack destroyed the Nexus with an 18k gold lead and momentum heading into the last day of play. 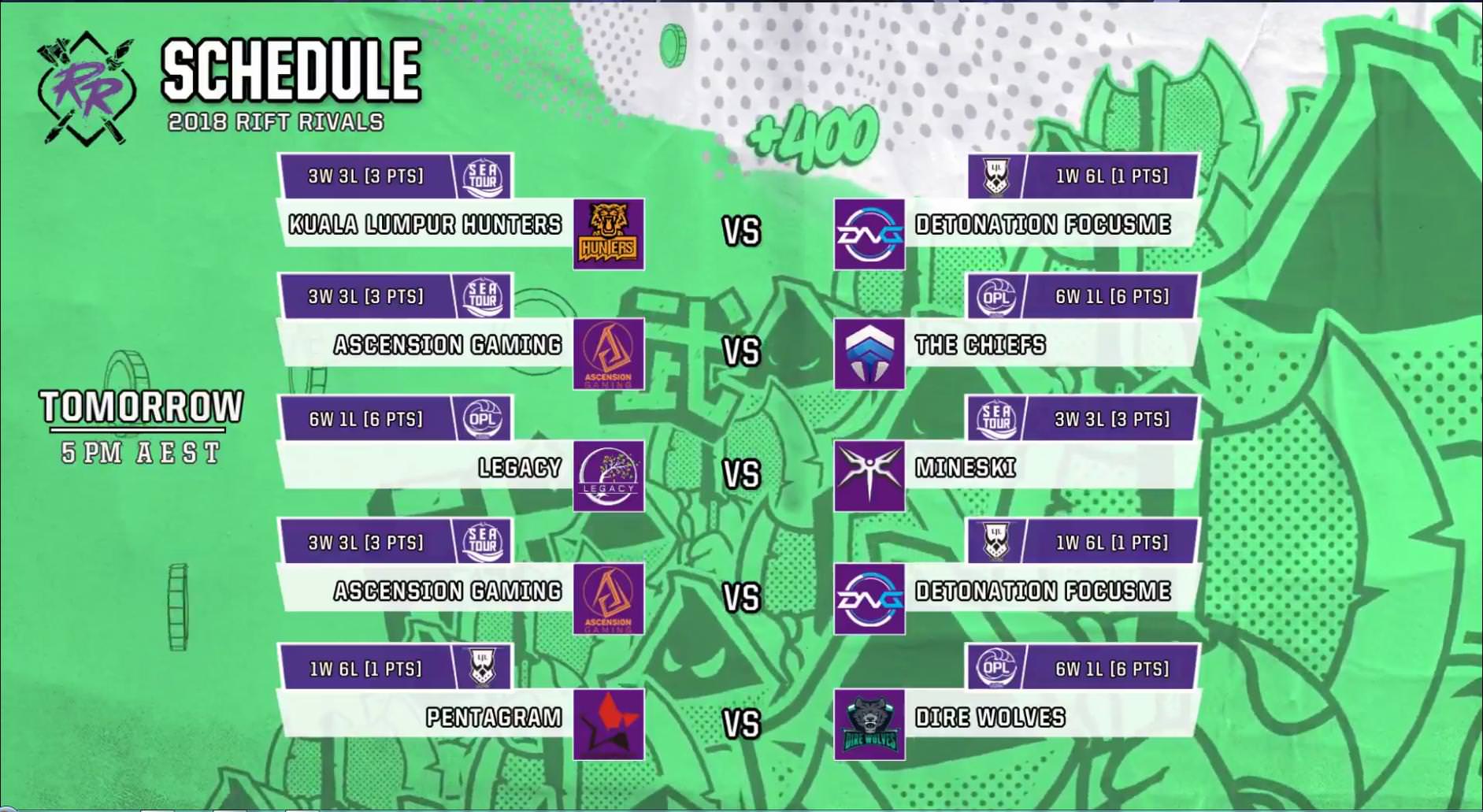 And that wraps up our second day of Rift Rivals 2018! Stay tuned, because we’ll have more content coming out all week right here on Respawn Ninja! As always, if you want to catch a bit of the action, head on over to http://twitch.tv/OPL and join the thousands already cheering on OCE! 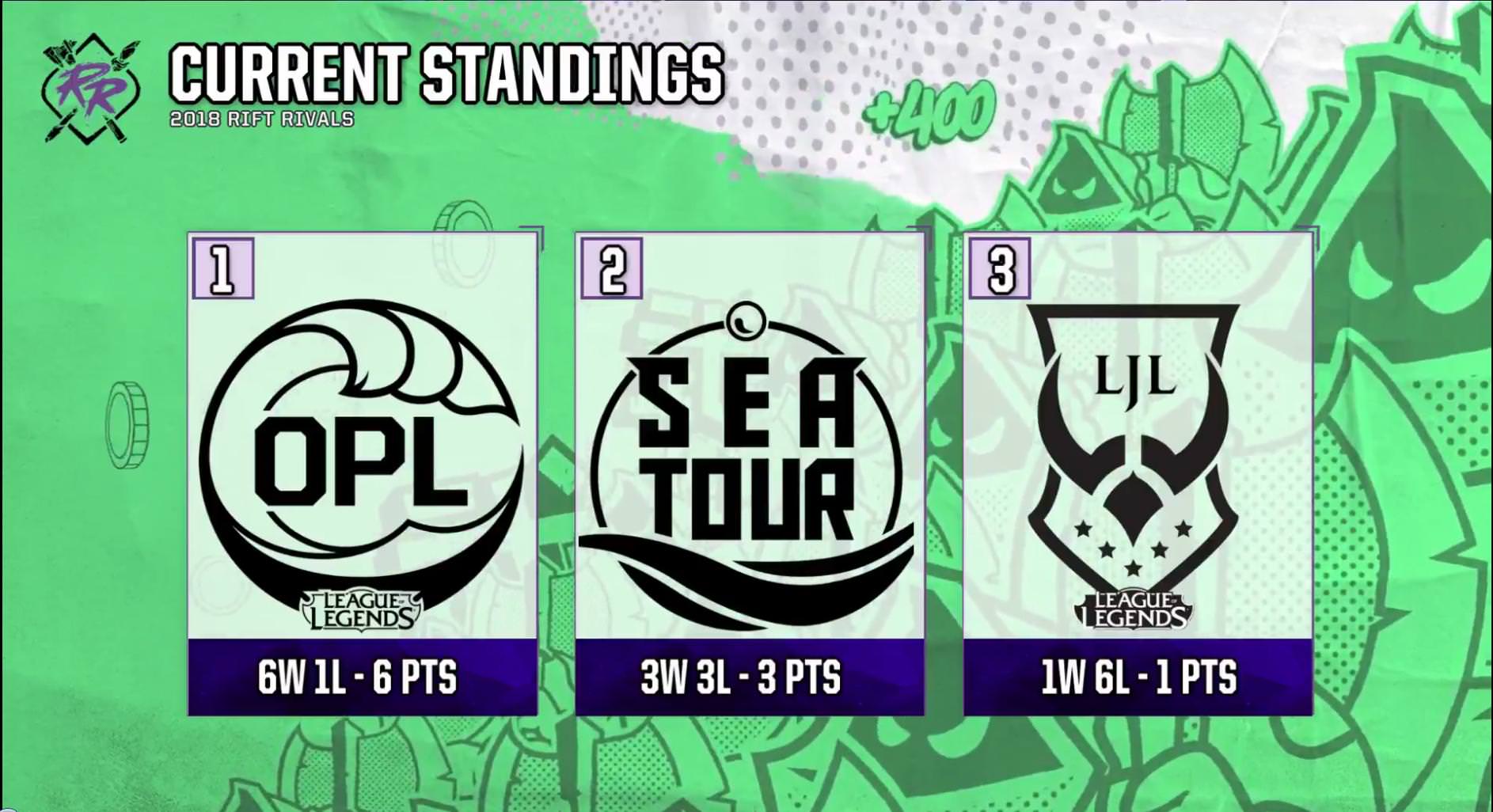