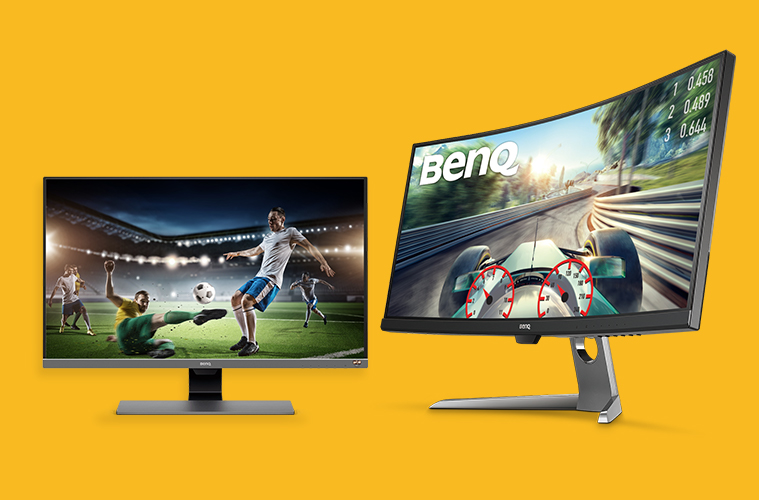 Recently, BenQ wanted us to try out a few of their monitors from their range mostly to check out one of their exclusive technology – Brightness Intelligence Plus or B.I.+. To be honest, we’ve never heard of B.I.+ before so let’s talk about what it is actually. B.I.+ Technology uses a sensor to detect the brightness within your surrounding and in real time adjusts the brightness and colour temperature of the monitor picture for the ideal setting in your area. Read more about B.I.+ on their website here.

While it’s actually hard to determine if the technology actually improves or helps your eyes (most of us are blind anyways) – the B.I.+ technology is in fact noticeable when we tested out the monitors. The monitors dim and light up based on the ambient lighting but whether people like this – is very subjective. Casual gamers might find the technology good especially combined with HDR but for the competitive gamers who prefer display stable custom configs – it’s probably best to stick to the Zowie models. However, when I used B.I.+ for movies and general entertainment especially for less serious gaming (even console games) – I’ve found B.I.+ technology to compliment well. It’s not a game changer but it’s noticeable.

We’ll dive deeper into each of the monitors with their own reviews soon but here’s an overview of the range BenQ HDR Monitors with B.I.+ in our overview buyers guide for the range featuring the technology.

The BenQ EL2870U is the entry point for BenQ’s B.I.+ technology coming in at $569. Featuring a UHD 4K panel with support for HDR combined with B.I.+ technology, the monitor is suited for mainstream use and casual gamers. While it does feature FreeSync, the 60Hz refresh rate will be instant turn off for most PC gamers as they will prefer a higher refresh monitor – something with a 120Hz or 144Hz panel. However, console gamers like the PS4 and Xbox One will fit right in here with a TV replacement monitor. If you’re not after a 55″ TV but want the take advantage of console gaming in a small space, the BenQ EL2870U would be ideal.

Essentially the bigger brother of the BenQ EL2870U, the EW3270U features a 31.5″ 4K panel instead of a 28″ (if you want that extra real estate). Pros and Cons wise, both units are identical featuring HDR support as well as the BenQ B.I.+ technology and FreeSync. Specifications wise, the bigger brother is slightly better on some fronts and boasts a VA panel instead of TN. However, the refresh rate is 60Hz so PC gamers might want to look at something faster but console gamers will feel right at home here.

Moving into the curved range for the BenQ monitors featuring B.I.+ technology, the BenQ EX3203R comes in at $749. When comparing to the EW range above, the EX models faster 144Hz refresh rate are more attractive to PC gamers by sacrificing the 4K resolution. While it’s not 4K like the EW models, the monitor gives users flexibility with PC and console gaming. The BenQ EX3203R also features HDR support and FreeSync so similarities are there when comparing to the above models. As someone who games on both PC and console, this is the entry point with
B.I.+ technology I’ll look at.

Sitting on the high-end scale of BenQ monitors featuring B.I.+ technology, the BenQ EX3501R features a 35″ UWQHD panel with 100Hz refresh rate. Compared to the EX3203R, the monitor does feature a higher resolution at 3440 x 1440 (EX3203R has a 2560 x 1440 resolution). One of the drawbacks compared to the smaller model is 100Hz which is significantly lower and may put off some PC gamers. We’ve covered the BenQ EX3501R before and would recommend the monitor for content editing with the ability to handle games with it’s great performance.

The above monitors were provided on loan for testing by BenQ Australia. Full individual reviews coming very soon for each monitor.